Save New Cross Walk In Centre

Along with the Labour councillors for New Cross ward, I recently responded to the consultation on the closure of the Waldron Health Centre, the walk-in health centre in New Cross. I am firmly opposed to the decision, which would reduce access to primary healthcare in one of the most deprived areas of our borough (and London). Because the health centre is a walk-in, the closure would particularly impact homeless people and undocumented migrants. 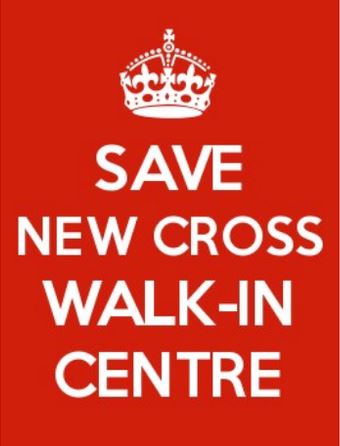 You can read our full response to the consultation below, and I encourage you to also sign the petition against the closure – which you can sign here:  www.change.org/p/dr-marc-rowland-save-new-cross-walk-in-centre

The future of the New Cross Walk-In Centre

As the Councillors and MP for New Cross Ward, we wanted to respond to your consultation on the future of New Cross Walk-In Centre.

We do not accept that there is confusion over current provision. Local residents are largely aware of their options for accessing primary care; both through their GP and through the Walk-In Centre. The Walk-In Centre is widely used because it is well-known, convenient, and well-valued. We believe closing the Walk-In Centre would lead to greater confusion, and potentially to unmet need and/or increased pressure on Lewisham Hospital.

We do not accept that the presence of the Walk-In Centre is the reason many people have not registered with a GP. Many users of the Walk-In Centre – including ourselves – have used it when they have an urgent health issue but been unable to get a GP appointment. The consultation document claims that ‘over a quarter (28.6%) of residents using the walk-in centre are not registered with a GP anywhere. This cost and [sic] Lewisham CCG almost 300,000 last year.’ We assume that this is the apportioned cost of these patients, relative to the total cost of the Walk-In Centre. Had these patients been registered with GPs, and had they not used the Walk-In Centre, their care would still have come at a significant cost, and any saving would have been far lower than this total. We therefore believe that presenting this figure in the absence of the counter-factual cost is misleading.

We are concerned that the extended access service may not offer sufficient volume of provision to meet current and future needs. As such, we share the concerns of the Lewisham Council Healthier Communities Select Committee expressed on 20/07/17, of the increasing difficulties in accessing appropriate on-the-day healthcare.

We are aware that many users of the Walk-In Centre do so because they have been unable to get an appointment at their GP. The survey in the consultation document shows that two in five (38%) current users went to the Walk In Centre because they couldn’t get a GP appointment (33%) or because they could not get through to their GP to book one (5%). A further 46% said they didn’t think they would be able to get an appointment. This suggests that a lack of immediate availability of GP appointments for people facing urgent health needs are a major driver of demand at be Walk-In Centre.

The consultation references the difficulties residents have cited with booking GP appointments. It states there is still ‘more to do’ here, which we agree with. We have serious concerns over the ability of the proposed system to meet demand, and of the potential resultant impact on Lewisham A&E. We believe that closing the Walk-In Centre when we do not know the replacement service will be able to meet demand is likely to lead to pressure on the A&E.

The impact on vulnerable communities

The Walk-In Centre is situated in New Cross, in one of the most deprived areas in London. Closing the centre would reduce accessibility of care in New Cross, requiring residents in the north of the borough to travel far further for the healthcare they need. We are concerned about this impact on the north of Lewisham, and we share the concerns expressed by the Healthier Communities Select Committee in this regard. We also share the view of the Save Lewisham Hospital Campaign, that ‘a service based in Lewisham Hospital is not a suitable replacement for a local service in the North of the borough. It is less convenient and accessible primary care for patients.’

We are also very concerned about the impact on residents who do not have access to primary healthcare as a result of their immigration status. Again, we believe that closing the Walk-In Centre would lead to an increase in attendance at Lewisham A&E given this group do not have access to primary healthcare through GPs. The closure may also lead to an increase in unmet health needs among these groups, which would be bad for the individuals concerned, and also a potential public health risk.

The impact on Lewisham A&E

We are very concerned about the impact of these changes on Lewisham A&E. Lewisham Hospital has been operating at high capacity in recent years, and has been struggling to meet growing demand in a context of restricted funding. The national target is for at least 95% of patients to be treated or admitted at A&E within 4 hours. Even before the winter hits however, just 89.9% of patients at Lewisham and Greenwich are seen on time, and the Trust has not met the target in over two years. This is not due to the failings of the hospitals; it is a demonstration of the weight of demand.

We know that many people who face an urgent health issue and are unable to get an appointment with their GP use the Walk-In Centre rather than Lewisham A&E. In doing so, they are doing the right thing, and trying to avoid adding to the pressure at the A&E.

We are concerned that in the short term, the change of service will lead to confusion about provision, with many ending up at a Lewisham A&E instead of the Walk-In Centre. We also believe that in the medium term, even when the changes have bedded in, Lewisham A&E may experience ongoing higher levels of demand if the extend hours service is unable to meet the level of need in the area.

We are concerned that if the Walk-In Centre was not available, people unable to get an appointment through their GP will end up going to Lewisham A&E. Again, the consultation survey highlights this risk. Two in five patients (40%) said they would go to Lewisham Hospital if the Walk-In Centre was closed. Applying this to the total number of visitors to the Walk-In Centre, this would have led to an additional 11,800 patients going to Lewisham A&E in 2016/17, leading to a very significant increase in levels of demand at the hospital. The latest figures (2015/16) show there were 215,654 attendances at A&E in Lewisham and Greenwich. An increase of 11,800 patient visits would therefore represent an increase of over 5%.

We share the concerns of the Save Lewisham Hospital Campaign that this is the worst possible time to close the Walk-In Centre. We are just about to head in to the winter season, and the Trust is already missing the target for A&E treatment times. We believe that closing the Walk-In Centre just as demand increases could significantly exacerbate the pressure on Lewisham A&E this winter.

We are also concerned about the impact of the changes on access to services for vulnerable communities including the homeless and those without legal access to primary healthcare. We are concerned that the changes may lead to more such patients going to Lewisham A&E, or to more unmet-need, or both.

Given the evidence of a potential increase in demand for Lewisham A&E at a time of great and growing pressure on the A&E, including evidence cited in the consultation itself, we think it is remarkable that this is not mentioned in the ‘What would closing the walk-in centre mean?’ We believe this shows that the consultation is partial and inadequate.

The process of the consultation

While we recognise Lewisham CCG has done its best to promote the consultation, we believe the process itself is flawed.

First, some of the information in the public domain is inaccurate. For example, it is clear that the vast majority of users of the centre are Lewisham residents, contrary to what has been reported.

Third, the presentation of some of the information is partial. The survey in the consultation points to the likelihood of greater pressure on A&E. Yet this is not mentioned as a risk, nor is any action to mitigate this risk mentioned.

Finally, it is our view that give the contract is ending in December, and that alternative services have already been put in place, re-providing the existing New Cross Walk-In Centre is not being considered as a potential outcome in the consultation. Given this, we share the concerns expressed by the Save Lewisham Hospital Campaign that the decision has in effect already been made, and that this does not therefore represent a genuine consultation.

For the reasons set out above, we oppose the closure of New Cross Walk-In Centre.

We call on Lewisham CCG to review the potential impact of closing the Walk-In Centre on Lewisham A&E.

We call on Lewisham CCG to re-start a genuine consultation, which gives patients and local clinicians the chance to discuss and plan any re-provision of services in the local area.

We call on Lewisham CCG to ensure there remains a walk-in service available at New Cross to ensure flexible access to primary healthcare in the area, and to ensure that we do not see additional pressure on Lewisham A&E.